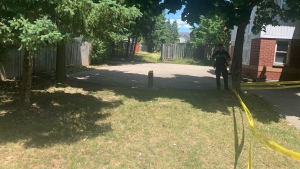 Peel Regional Police have identified a man who was fatally gunned down in Mississauga Wednesday night and are appealing for information in the case.

Officers responded to gunfire at a housing co-op in the area of Glen Erin Drive and Britannia Road West at around 10 p.m. on June 22.

When they arrived they found a man suffering from gunshot wounds. Despite life-saving efforts by first responders, he was pronounced dead at the scene.

One neighbour who lives in the complex told CP24 Thursday that Bennett was a well-liked member of the community.

“He was a very nice guy, used to pay rent on time. He was very frank, well-disciplined. So he is very popular in the community as well,” the neighbour said.

Police said Friday that they believe that Bennett was targeted.

Yellow police tape cordoned off the area around a townhouse Thursday as police continued to investigate. A trail of shell casings found in an alleyway at the scene seemed to suggest some sort of pursuit before the victim collapsed near a fence behind some houses, CP24 Crime Analyst Steve Ryan said.

Speaking with CP24, one woman who lives in the area said she heard gunshots ring out Wednesday night and thought it might be fireworks.

“I thought it was fireworks and I was like, ‘Oh, what are they celebrating?’” She said. “And I sat and I said ‘well those are too loud.’ I called my brother and I was like ‘hey do you think we should call the police because those don’t sound like fireworks.’”

She said less than three minutes later she heard sirens.

“And I could just hear unfortunately, like a lot of sad screaming towards that side of the neighborhood.”

There is no suspect description so far and police are appealing to anyone who may have information about the case or video footage from the area to get in touch with investigators.