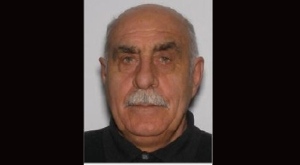 An elderly Toronto man has been identified as the victim of a fatal shooting at a plaza in the city’s Briar Hill-Belgravia neighbourhood on Monday night.

Police said 72-year-old Vito Lapolla was gunned down in the area of Dufferin Street and Glencairn Avenue at around 6 p.m.

Speaking to CP24 on Monday, investigators said that it appears the gunman exited a vehicle and proceeded to fire shots at the victim.

The suspect fled the area in a white SUV that was last seen heading northbound on Dufferin Street.

Lapolla, who was located by officers inside a vehicle, was rushed to a trauma centre for treatment but did not survive.

A post-mortem examination is scheduled for Wednesday.

Police said the gunman is believed to be around five-foot-ten or five-foot-eleven and has a thin build. He was dressed all in black and was wearing a hooded sweater.

Officers have not discussed any possible motives for the murder.

The homicide unit is continuing to investigate.