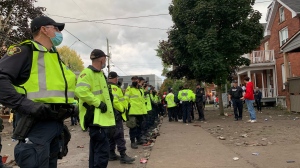 Police were called to deal with large, rowdy homecoming parties Saturday near Queen's University in Kingston, Ont., and Acadia University in Wolfville, N.S.

In Kingston, local police confirmed that an officer was taken to hospital after projectiles were thrown at police as large crowds swarmed the city's university district on Saturday afternoon.

Police said numerous arrests were made during what they declared an “aggravated nuisance party,” which allowed them to fine attendees up to $2,000 each.

As well, Kingston Police posted a video online showing hundreds of what they described as “intoxicated students” gathered in the dark near the Victoria Park area.

Police haven't said whether anyone else was hurt, or what charges may be pending, but they confirmed that additional officers from the Brockville, Ont., and the Ontario Provincial Police in Durham were called in to help with crowd control.

Queen's University opted against holding its traditional in-person homecoming event this weekend for a second year in a row due to the COVID-19 pandemic.

“This behavior and total disregard for public safety is appalling,” the association said. “Our members and policing partners have been working around the clock.”

In Wolfville, the RCMP confirmed that arrests were made and fines were handed to students who gathered by the hundreds on the town's streets and in backyards.

“Those calls started early on Saturday afternoon and continued into the early morning hours ... There were large gatherings, open liquor, persons standing on vehicles.”

Officials at Acadia University could not be reached for comment.

Late last month, Halifax Regional Police responded to a flood of noise complaints from streets near Dalhousie University, where thousands of people gathered - first for a party in the afternoon and then for a larger event that night.

Frank Harvey, the university's provost, said the illegal gatherings posed a safety risk to the Dalhousie community. That's why university officials urged students who attended the parties to stay away from classes for a week and get tested for COVID-19.

This report by The Canadian Press was first published Oct. 17, 2021.