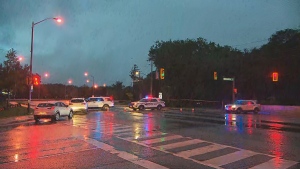 York Regional police are investigating a shooting in Vaughan.

Emergency crews were called to a commercial plaza near Thistlewood and Islington avenues at around 5:40 p.m. for reports of shots fired.

When officers arrived, they found a man suffering from gunshot wounds

He was pronounced dead on the scene.

Police are looking for a vehicle of interest described as a black pickup truck that was seen fleeing the area northbound on Islington Avenue.

This is the second homicide in Vaughan in less than 24 hours.

Police said a 29-year-old man was killed and another is in hospital after a shooting on 30 Freshway Drive, east of Jane Street.

York Regional police are investigating a shooting in Vaughan.