Police investigating after vehicle crashes into house in Toronto 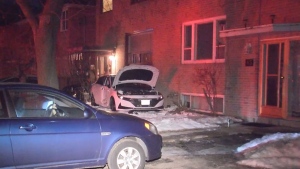 No significant injuries reported after a car crashed into a house early Saturday morning.

Toronto police are investigating after a vehicle crashed into a house early Saturday morning.

At around 2 a.m., police responded to reports of a vehicle that collided into a home on Edinborough Court, near Scarlett Road and St. Clair Avenue West.

Four people were in the car at the time of the incident, police said.

Toronto paramedics said a woman was assessed at the scene for minor injuries.

A basement window of the home is broken but the home has no structural damage, police said.

The cause of the crash is unknown and there is no word if any charges will be laid.