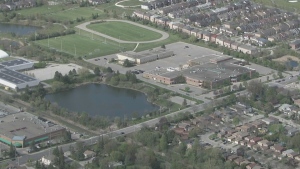 St. Brother Andre High School and Mount Joy Lake Park in Markham are seen in this May 22, 2020 photo. York Regional Police are investigating an alleged dog poisoning in the area. (Chopper 24)

York Regional Police are asking for witnesses after a dog ate a potentially poisoned substance in a Markham park and died Thursday.

The incident happened near the track at St. Brother Andre High School, in the area of 16th Avenue and Markham Road.

Police said Hugo, an 11-month-old St. Bernard Poodle mix, was out for a walk with his owner when he located a water bottle that had been cut open.

“Hugo began eating an unknown substance that was inside,” police said in a news release. “Shortly afterwards, the dog became very ill and died.”

Police are urging pet owners and parents to be vigilant and ensure that pets and children don’t eat anything found on the ground.

Anyone who observed any suspicious activity in the area is asked to contact police or Crime Stoppers anonymously.