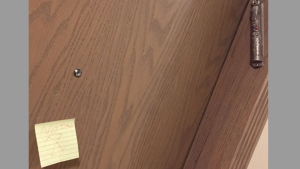 Toronto police are investigating after Anti-Semitic notes were found on the doors of several units at a Willowdale condo building.

Post-it notes bearing a Swastika and reading ‘No Jews’ were found on the front doors of several Jewish residences in the building on Beecroft Road, in the Yonge Street and Park Home Avenue area.

Some of the notes contained Anti-Semitic slurs and some neighbours reported that their mezuzahs – blessings traditionally posted on the doorways of Jewish homes – had been vandalized.

In all, seven residents reported receiving the notes or having the mezuzahs on their doors vandalized.

Speaking with CP24, one resident who came home to find her mezuzah vandalized said she was “shocked.”

“It’s naturally very disturbing,” Helen Chaiton said. “I come from the Holocaust – my parents came to Canada in 1948 after the war. So I’m very familiar with Anti-Semitism and I know historically what ensues.”

Chaiton said her rabbi helped her post a new mezuzah today after hers was vandalized last week. Then this evening a neighbour knocked on her door to alert her to a disturbing note that was posted on his door.

“So this really is a very serious indication of the illness that is prevailing that’s resurgent now again,” Chaiton said.

It’s not clear who left the notes, though residents say they believe it may be someone who lives in the building. The building does not appear to have surveillance cameras in the hallways.

Toronto police said they have received a complaint about the incidents and are investigating.