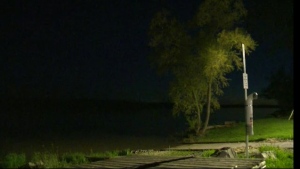 The Grand River is pictured in Dunnville Tuesday May 17, 2022.

Provincial police say they are investigating the discovery of human remains in an Ontario river in Haldimand County, west of the Niagara Region.

Ontario Provincial Police were called to an address in Dunnville after human remains were located in the waters of the Grand River at around 1:20 p.m. Tuesday, police said in a news release.

There's no information so far about the age or gender of the person who died or exactly where the remains were found.

An autopsy has been scheduled to determine the cause of death.

“The Haldimand County OPP Crime Unit is continuing to investigate the circumstances surrounding the death, under the direction of the OPP Criminal Investigation Branch,” police said in their release late Tuesday.

The Grand River is pictured in Dunnville Tuesday May 17, 2022.