Police are investigating a suspicious fire at a Markham airport on Thursday night that destroyed a business jet believed to be worth a million dollars.

The fire broke out at around 11:30 p.m. on the tarmac outside a hangar at Buttonville Municipal Airport, located near Highway 7 and Highway 404, in Markham.

According to investigators, it appears a suspect cut through a fence on an adjacent property to gain access to the area.

Police also say there is some evidence that the aircraft, which has been described as a mid-size business jet, was tampered with and a flammable liquid was used to ignite the plane.

Police told CP24 that a gas can was found at the scene. 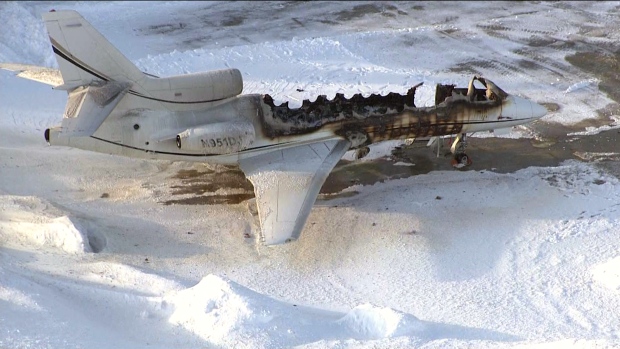 The aircraft, a 1980 Dassault Falcon 50, is believed to be worth approximately $1 million.

It has been parked at the airport since October and police say the owner of the plane has been notified about the fire.

Police have not released any information on possible suspects but the Office of the Fire Marshal and York Regional Police are investigating the incident.