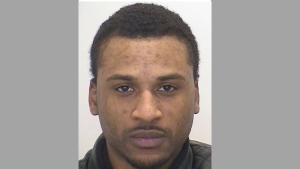 Police in Toronto and Thunder Bay are asking for help to find a Toronto man wanted in connection with both a murder and an alleged sexual assault of a child.

According to police, the suspect is wanted in connection with the murder of another Toronto man in Thunder Bay last month.

Emergency responders were called to a home in the 300 block of Marks Street South in Thunder Bay at around 4:50 p.m. on May 22 for a report of a seriously injured male.

The victim – since identified as 21-year-old Edmond Clovis of Toronto – was rushed to hospital where he died of his injuries. An autopsy confirmed that Clovis died as a result of trauma sustained in an altercation just prior to when he was found.

Thunder Bay Police have said they believe Clovis was targeted and that his death was gang-related.

Police say the same suspect wanted in the murder is also wanted in connection with the ongoing sexual assault of a child that allegedly took place between 2014 and 2015 in Toronto. Few details about that investigation have been released.

Michael Cleghorn, 29, is wanted for sexual assault, sexual interference, two counts of indecent exposure to a person under 16 years of age, two counts of uttering threats and second-degree murder.

Police say he should be considered armed and dangerous. Anyone who sees him is being advised to call 911 rather than approach him.

A suspect vehicle that was seen fleeing the scene of the murder is also being sought, Thunder Bay Police say. It is described as a newer model, dark charcoal or black Mazda CX 5.

Investigators are asking anyone with information about the suspect’s whereabouts or the suspect vehicle to call Toronto police at 416-808-7474, the Thunder Bay Police Homicide Unit at 807-684-5000 or call Crime Stoppers anonymously at 416-222-TIPS (8477).