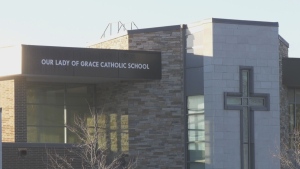 Police are looking for two suspects in connection with an attempted abduction of two young girls near Barrie yesterday afternoon.

Police are looking for a man and a woman in connection with the attempted abduction of two 10-year-old girls near Barrie.

Police say the girls -- students at Our Lady of Grace Catholic School in Essa Township -- were walking on school property yesterday afternoon when a woman tried to grab them and put them in a grey car.

The two students escaped safely and the school was placed into hold and secure while police searched the area.