Police looking for suspects after shots fired at tow trucks in commuter lot off Hwy. 404 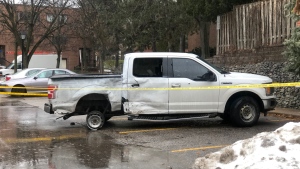 A white truck is seen near Don Mills Road and Steeles Avenue on Dec. 9, 2019.

Police are searching for suspects after finding a damaged white truck believed to have been involved in a shooting in Richmond Hill Sunday night.

Officers were called to a commuter parking lot in the area of Highway 404 and Major Mackenzie Drive around 8:15 p.m. after receiving a report of a shooting.

According to investigators, a white Ford F-150 pickup truck with no licence plate entered the parking lot and drove up to two parked tow trucks. A passenger in the Ford F-150 got out of the truck and pointed a firearm at the driver of one of the tow trucks and began to shoot.

The victim put his car into gear and tried to leave the parking lot, police said, colliding with the suspect’s vehicle.

Police said the victim eventually drove into a ditch. No injuries were reported.

The suspect fled the area travelling southbound on Highway 404.

On Monday, the vehicle was found by Toronto police near Don Mills Road and Steeles Avenue.

The shooter has been described by investigators as being male, standing at about five-foot-ten with a thin build. He was last seen wearing a black balaclava mask, black gloves, light-coloured jeans and a black hooded jacket.

Police have not provided a description of the suspect vehicle’s driver.

Anyone with information is being asked to contact police or reach out to Crime Stoppers anonymously.

A white truck is seen near Don Mills Road and Steeles Avenue on Dec. 9, 2019.