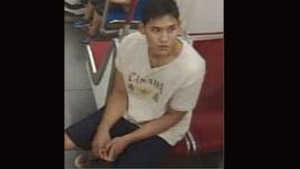 Toronto police are trying to identify a man who investigators say pulled out a large kitchen knife on the subway on Sunday afternoon.

Police say at around 2:47 p.m., a passenger on board a subway train near Bloor-Yonge Station began yelling, swearing, and pacing around a subway car. At one point, police say, the man pulled out a large kitchen knife from a duffel bag and continued to pace.

Passengers on the train alerted TTC officials, who then called police.

The man with the knife placed the object back in the duffel bag and fled the train at Bloor-Yonge Station before officers arrived on scene.

He has been described as five-foot-ten with a thin build, straight black hair, and was wearing a white T-shirt with ‘Canada’ written on the front. He is also believed to have been wearing black, knee-length shorts and white flip-flop sandals. The duffel bag he was carrying was black in colour.

Investigators have now released images of the suspect to the public in an effort to identify him.

Police say anyone who spots the man should not approach him but call 911 immediately.

Witnesses who have not yet spoken to police can contact officers at 51 Division or leave an anonymous tip through Crime Stoppers.