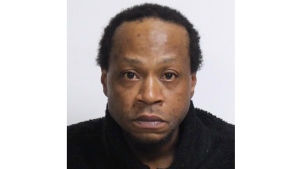 Mark Webster, 43, is shown in a TPS handout image.

Police have named a 43-year-old suspect in a bank robbery in Toronto’s Chinatown neighbourhood last month where a teller was stabbed multiple times.

Police say that on June 27th, a male suspect entered the bank, located at Spadina Avenue and Dundas Street, wearing a mask and hoodie and pulled out a knife.

It is alleged that he then jumped over the counter, approached an employee and made a demand for cash.

That employee took cash out of their wallet and offered it to the suspect, police say.

The suspect took the cash but then allegedly stabbed the employee multiple times.

The employee was subsequently rushed to hospital with serious but non-life threatening injuries.

Police say that the suspect, meanwhile, fled the bank through an emergency exit at the rear of the premises.

On Tuesday, police identified the suspect as 43-year-old Mark Webster.

He is wanted for 13 offences including robbery with an offensive weapon, assault causing bodily harm and wearing a disguise with intent.

Investigators say he should not be approached and anyone who spots him should immediately dial 911.

Mark Webster, 43, is shown in a TPS handout image.