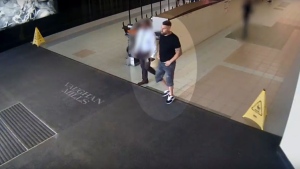 A suspect in a death threats investigation at a mall in Vaughan is shown in this surveillance camera image. (York Regional Police)

York Regional Police have released surveillance footage of a man who allegedly threatened the life of a shopper inside a Vaughan mall over the summer.

The incident happened at a mall on Bass Pro Mills Drive on the morning of Aug. 20.

Police say that the complainant alleged that he was inside the mall when he was approached by a suspect who made several demands and then threatened to kill him.

In a news release issued on Tuesday, police said that officers have “exhausted all leads” following a “lengthy and thorough investigation” and are now releasing surveillance camera footage of a suspect in the hopes that a member of the public may recognise him.

The suspect is described as white, about five-foot-six to five-foot-seven with brown hair.

He reportedly fled the scene in a black vehicle, police say.