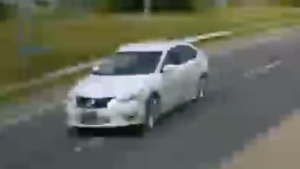 A suspect vehicle wanted in connection with a deadly hit-and-run near Midland and Sheppard avenues on Wednesday afternoon is shown in this surveillance camera image. (Toronto Police Service)

Police have released a surveillance camera image of a second vehicle that is wanted in connection with a deadly hit-and-run in Scarborough’s Agincourt neighbourhood on Wednesday morning.

The victim, a 76-year-old woman, was crossing Midland Avenue at Sheppard Avenue in the crosswalk at around 11:30 a.m. when she was struck by a large fuel truck.

Police have said that the woman was knocked to the ground and then run over by the truck’s rear wheels, likely killing her.

The 47-year-old driver of that truck did not stop and continued south on Midland Avenue, however he was located by police a short time later.

Meanwhile, moments after the woman was initially struck a white sedan turned south onto Midland Avenue from Sheppard Avenue East, striking her and dragging her further down the street.

Police say that a young brown male stopped the vehicle and got out but then fled the scene upon realizing what had happened.

In a news release issued on Thursday, police published a surveillance camera image of the suspect vehicle and made an appeal for information.

“Police are asking local residents, business, and drivers, who may have security or dash camera footage of the area or incident, to contact investigators,” the release states.

It is not clear what charges, if any, the driver of the fuel truck will face.