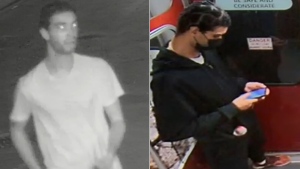 Police are looking for a suspect who allegedly stabbed a woman multiple times at Dundas West Station. (Toronto Police Service)

Toronto police have released new images of a suspect wanted in connection with an ‘unprovoked’ attack at Dundas West Station Friday evening that left one woman injured.

Officers were called to the westbound platform of the TTC station just before 11 p.m. for a stabbing.

According to police, a woman exited a subway train and was stabbed multiple times by a man who also got off the train.

Toronto paramedics said the victim, a woman in her 30s, was transported to the hospital with serious but non-life-threatening injuries.

According to police, the suspect and the victim are not known to each other.

“This is believed to be an unprovoked attack,” police said in a news release Sunday.

The suspect is described as between five-foot-five and five-foot-ten, with a slim build and black hair in cornrows.

Police said he is believed to be armed, violent and dangerous.