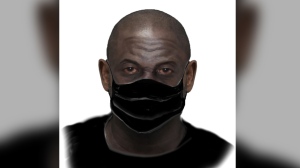 A composite sketch of a man wanted in downtown Toronto sexual assault investigation.

Toronto police have released a composite sketch of a man wanted in downtown sexual assault investigation.

The incident happened on July 17, at about 8:30 p.m., in a parking garage stairwell near Spadina Avenue and Dundas Street West.

According to police, an unknown man armed with a knife approach a man and sexually assaulted him.

The suspect is described as six-feet tall and roughly 40 years old with a medium build, unshaven, a shaved head, and dark “blood shot” eyes.