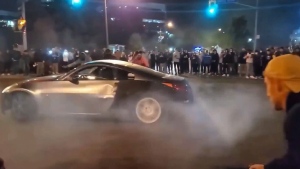 Peel Regional Police have made several arrests in connection with illegal street racing and stunt driving.

York Regional Police announced a crackdown on stunt driving and street racing Wednesday, releasing new video of a recent incident in which a vehicle was caught on camera doing donuts and speeding along the shoulder of busy roadways.

The crackdown is part of Project ERASE, an annual initiative meant to educate drivers about the dangers of speeding.

"We are all well aware of the devastating carnage resulting from speeding and dangerous operation of motor vehicles. We've all seen the horrific pictures of mangled cars and a tragic loss of life caused by the foolish and dangerous activity," Insp. Ian Hill told reporters. "What we don't often see are the broken families and the heartache that carry with them for the rest of their lives."

"The reality is street racing and dangerous driving is illegal and has no place on our roadways or highways."

In 2021, York police made 74 arrests in connection with street racing and stunt driving.

Of those arrests, about 70 were part of Project Takeover, a probe into organized stunt driving in the Greater Toronto Area.

There were 68 criminal code charges laid, in addition to 510 traffic highway act charges.

Hill said that so far this year, eight arrests have been made and police laid 44 criminal charges and 10 highway traffic act charges.

York Regional Police also released a video from their Air2 helicopter of an incident that occurred on May 12.

In the video, a driver is seen doing donuts in a parking lot before driving away on a highway, passing cars on the on-ramp.

Police say in the video description that the driver travelled about 200 km/h along the highway shoulder. In the video, the black vehicle is seen speeding past multiple cars stuck in traffic.

The vehicle is then seen travelling dangerously through multiple intersections, weaving around cars before pulling into an underground parking area for a townhouse complex.

The driver, who police have said was 19 years old, is then seen fleeing the area on foot. They were eventually taken into custody by officers on scene.

Police have not said what charges the driver is facing.

In areas where the speed limit is above 80 kilometres an hour, a motorist will face stunt driving charges if they go more than 50 km/h above the limit.

Peel Regional Police have made several arrests in connection with illegal street racing and stunt driving.