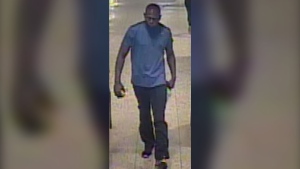 Police are looking for this man who they believed assaulted a 69-year-old man at Sheppard West station last month. (Handout)

Police are asking for the public’s help in identifying a man wanted in connection with an assault at a TTC subway station last month.

Police say a man entered the station and allegedly assaulted a 69-year-old man.

As a result, the victim sustained significant injuries, police say.

The suspect fled the area before police arrived.

Police have released images of the man on Saturday.

He is described as between 40 to 50 years old, six-foot-tall, with a slim build and clean-shaven. Police say he was wearing a blue t-shirt and black pants.