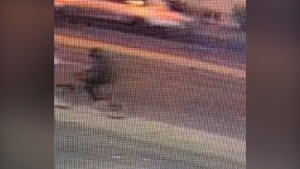 Toronto police are seeking help identifying a man who they say sexually assaulted a female jogger in Scarborough earlier this month.

It happened on the afternoon of Nov. 13 in the area of Kingston Road and Chine Drive.

Police said a 37-year-old woman was jogging in the area when a man riding a bike approached her from behind, sexually assaulted her and fled.

On Friday, police released an image of the suspect who was wearing a black bubble jacket, a grey hoody with a hoodie covering his head, and dark track pants.