Police search for three men in carjacking at gunpoint in Scarborough 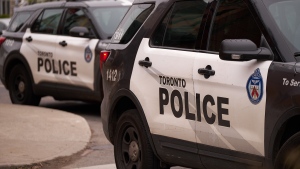 Police are asking the public for assistance with identifying three men who allegedly stole a car at gunpoint in Scarborough.

On Monday, officers allege two men exited a getaway car while another stayed inside the vehicle in the area of Bamburgh Circle and Warden Avenue.

As a 37 year old woman returned to her parked car, police say the two men approached her and one of them pointed a gun at her. He then demanded her purse, cell phone and car keys.

The two men proceeded to take the woman’s possessions, enter the car and drive away.

The third man then drove the getaway car, described as a 4-door blue sedan, away from the area.

The victim’s stolen car has been recovered. Members of the Hold Up Squad are now looking to identify the three men.

The first man is described as Black, 20 to 30 years old with a thin build, short black hair and approximately 5’9” tall.

The second man is described as having a lighter complexion and also around 20 to 30 years old.

Police say they have no description for the third man.