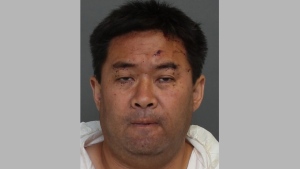 Zhebin Cong, 47, is pictured in this photo released by Toronto police. (Handout)

A man who is believed to have disappeared from CAMH earlier this month has left the country.

Zhebin Cong, 47, was last seen on July 3 at around 4 p.m. in the Queen Street West and Ossington Avenue area.

A police source has confirmed to CP24 that Cong was previously charged in the fatal stabbing of a man in 2014 and found not criminally responsible.

Toronto police said Tuesday that Cong has "fled the country" and that he boarded an international flight on the same day he was reported missing.

According to a report from Newstalk 1010, Cong disappeared from the Centre for Addiction and Mental Health. CAMH would not release any details about Cong due to confidentiality policies.

However the mental health facility released a statement to CP24 saying that they take safety "very seriously."

"CAMH has a forensic mental health program, which includes secure forensic units," the statement reads. "Patients are admitted to forensic mental health programs on order of the Ontario Review Board (ORB). CAMH takes public safety very seriously and works closely with police. The ORB sets the parameters of supervision and management for people found not criminally responsible."

Police said they are working with international law enforcement agencies to try and locate Cong and described their investigation as "ongoing."

Cong is described as standing around five-foot-nine and weighing about 200 pounds. He has a heavy build with short black hair. Police say he has trouble speaking English.

Anyone who spots him is being advised to call police.

Zhebin Cong, 47, is pictured in this photo released by Toronto police. (Handout)