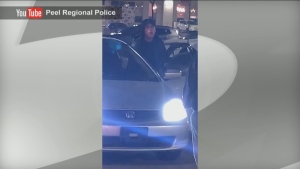 Peel police are asking for the public's help in identifying a suspect accused of making racist comments in Mississauga in January.

MISSISSAUGA, Ont. - Police west of Toronto are asking for the public's help identifying a man who allegedly yelled racist comments and threats in three separate incidents in January.

Peel Regional Police allege the incidents took place on Jan. 30 in the neighbouring cities of Brampton, Ont., and Mississauga, Ont.

In the Mississauga incident, police allege the man shouted racial slurs at a woman in a local parking lot.

Investigators say the man is also suspected of being involved in similar incidents at two Brampton plazas earlier in the evening.

Police say the suspect is described as a white man in his 40s wearing a black t-shirt and a black baseball hat driving a two-door silver Honda.

Anyone with information about the incidents is asked to contact police.

This report by The Canadian Press was first published Feb. 26, 2020.