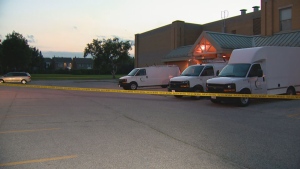 Police are investigating after shots were fired in front of a Scarborough school.

Toronto police are appealing for information after shots were fired Friday afternoon outside a Scarborough school, where more than two dozen children were attending daycare.

Officers responded to a shooting at Rouge Valley Public School, in the area of Sheppard Avenue East and Kingston Road, just before 2 p.m.

Duty Insp. Ishmail Musah said two groups got involved in a fight that began at the rear of the school and moved to the front of the building.

"The two groups got into individual cars, and at least one person from one of the vehicles shot at the other vehicle," Musah said.

At that time, 30 children between the ages of one and 10 were in a daycare inside the school. Musah said they had to shelter in place due to the incident.

"It is concerning," he said. "They could have been coming out to play. Anything could've happened."

Officers did not locate a victim but found four rounds that were fired.

"It was horrifying. The fact that nobody was hit, we're lucky," Musah said.

Two of the rounds went through the window of a child's bedroom across the street. Musah said nobody was at home at that time.

"This is a residential area. We've got a school here, homes across the street. There's a basketball court just to the other side of the school here," he said. "So, there's plenty of people here that could have been injured."

Musah said they don't have any information at this time on the suspects and the vehicles they used.

"This is one of those things that we don't want to go to as police officers. People are doing their normal day. It's a beautiful July afternoon, and people are enjoying that being out. And this just could have changed lives in many ways," he said.

Witnesses, including anyone driving in the area at the time of the incident and who has dashcam video, are asked to contact the police.

Police are investigating after shots were fired in front of a Scarborough school.