Police seek suspect in assault of crossing guard in Riverside 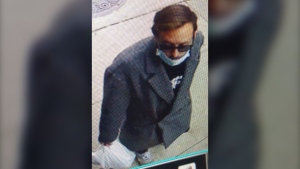 A suspect in the assault of a crossing guard in the city's Riverside neighbourhood on Oct. 6 is shown. (Toronto Police Service)

Police have released surveillance camera images of a man who allegedly assaulted a crossing guard in the city’s Riverside neighbourhood last week.

Police say that the victim was working at the intersection of Queen Street and Boulton Avenue at around 3:20 p.m. on Oct. 6 when he was approached by an unknown man, who proceeded to engage him in conversation.

It is alleged that the man then made a derogatory comment to the crossing guard and assaulted him.

It is not clear whether the crossing guard sustained any physical injuries.

Police say that the suspect is 30 to 40 years old, about six feet tall and 175 pounds with short brown hair combed to the side and a short beard. He was last seen wearing sunglasses, a dark grey three-quarter length jacket, a black shirt, black pants and white and black running shoes. He was also holding a plastic bag.

Anyone with information about the identity of the suspect is being urged to contact police.