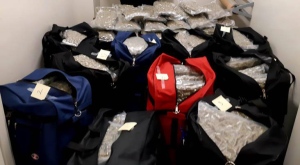 Shortly before 4 a.m., an officer on patrol pulled over a white van in the area of Highway 407 and Ninth Line.

While speaking to the driver and passenger, police say the officer noticed multiple duffel bags inside the vehicle.

Police later discovered that the bags contained more than 360 pounds of cannabis, which have an estimated street value of $1.6 million.

The driver and passenger, identified by police as Montreal residents Alan Dang, 32, and Boxuan Gu, 36, have been arrested and charged.

They are each facing one count of possession of cannabis for the purpose of distribution.

The investigation is ongoing and officers are asking anyone with information about the case to contact York Regional Police.