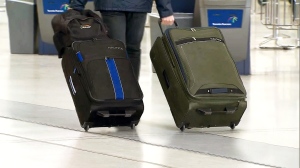 A Canadian Automobile Association-commissioned poll being made public today found that just over half of respondents said they hadn't heard or read anything about the rules aiming to protect flyers caught in travel nightmares.

The Leger poll of 1,517 respondents was conducted between Nov. 27 and Dec. 4, but can't be assigned a margin of error because internet-based polls are not considered random samples.

The first set of passenger-rights rules landed in mid-July and required airlines to compensate and respond to tarmac delays, denied boardings and lost or damaged luggage.

The final set of rules take effect this weekend and will require airlines to seat parents beside or near their children at no extra cost, and compensate flyers for delays and cancellations within an airline's control.

The rules set out minimum standards for all carriers to follow and requirements to help the travelling public understand their rights, but rely on travellers filing complaints with airlines or, as a last resort, the Canadian Transportation Agency.

Six months into the new regime, it isn't clear how well things have worked because data about complaints rests with air carriers and isn't yet public, said Ian Jack, CAA's managing director of government relations.

The poll result raises questions about how the remaining rules set to come into force will fare, he said.

"We clearly need a lot more public education on this so that people actually understand they've got these rights and that they start understanding how to exercise them," Jack said.

"In order to get your rights, you need to know about them. So clearly the government and the carriers need to do a better job of letting people know about this new regime or it's simply not going to work."

Transport Minister Marc Garneau is scheduled to discuss the introduction of the new set of rules during an event this morning at Ottawa's airport.

Garneau hosted a similar event in the spring ahead of the first wave of rules in July, at which he said the rules and timelines aim to strike a balance between being fair to passengers and to air carriers.

The rules around cancellations were, in Garneau's words at the time, "more complex," which required a longer runway for airlines to set up new policies.

Air Canada and Porter Airlines, as well as 15 other carriers and two industry groups, launched a legal challenge to the new rules over the summer, arguing the regulations exceeded the Canadian Transportation Agency's authority.

The legal challenge is currently before the Federal Court of Appeal.