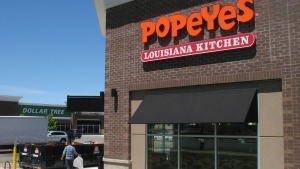 A worker carries garbage to a bin as construction takes place on Popeyes Louisiana Kitchen restaurant in Bowmanville, Ont. on Saturday June 3, 2017. Restaurant Brands International Inc. says it has an agreement to develop and open more than 1,500 Popeyes restaurants in China over the next 10 years.THE CANAIDAN PRESS/Doug Ives

TORONTO -- Popeyes' much-hyped chicken sandwich will go on sale Canada-wide on Monday, after trial launches in Edmonton and southern Ontario earlier this year.

The sandwich made headlines for rapidly selling out after it was released in the U.S. last year. But unlike last year's U.S. frenzy, the Canadian launch requires crowd control as the COVID-19 pandemic keeps restaurant capacities limited.

Popeyes Canada general manager Rob Manuel said franchisees will add physical distancing stickers both inside and outside restaurants to better direct customers while complying with pandemic-related public health measures. Manuel said the sandwich will also be available through food delivery apps at its Sept. 14 launch.

Although hiring is left to franchise owners, Manuel said shop owners are being encouraged to hire full-time staffers if needed, to deal with increased demand.

Popeyes has launched an ambitious expansion in the Canadian market in the last five years. Of its 230 locations, 100 were added in the past four years.

Popeyes, which is owned by Tim Hortons-parent company Restaurant Brands International Inc., is one of several restaurants trying to woo Canadian consumers with new fried chicken offerings. Chick-fil-A drew crowds when it opened a Toronto location last year and KFC launched its own Famous Chicken Sandwich on Sept. 7, touting a version with Canadian chicken available only in Canada.

Now restaurants, like many businesses, are trying to bring in customers as the COVID-19 pandemic has pressured business. RBI said in August that last quarter's sales were down 31 per cent year over year, with fewer office workers grabbing morning coffees at Tim Hortons. The upside: Popeyes drive-thru sales across all regions were up 100 per cent during the second quarter, outperforming sister-brands Burger King or Tim Hortons.

Despite RBI's ties to Canada, Manuel said Popeyes is taking its cues from the U.S. market, more so than the Tim Hortons audience, when it comes to the Canadian sandwich launch.

The sandwich - a battered, breaded white meat chicken breast fillet, pickles, plain or spicy mayonnaise, and brioche bun - was met with critical acclaim in the U.S., with Time magazine writing it was "worth the hype," even if it was in-line with similar offerings from other fast-food chains.

Manuel said trials - one in Edmonton, one in southern Ontario, and a pre-release to 144 lottery winners this weekend - have given the chain a good idea of what level of demand they can expect. On a big day, a Popeye's in Edmonton saw 1,600 sandwich orders, 10-times the level for the old sandwich recipe, Manuel said.

"The Canadian market, for us, is one of our faster growing markets already. We think the chicken sandwich will continue that momentum," Manuel said.