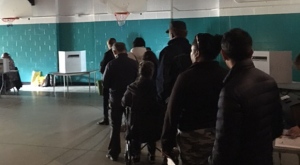 A power outage in the city’s east end left some polling stations without electricity on Monday morning.

Speaking to CP24, Elections Canada spokesperson Dugald Maudsley confirmed that despite the outages, the affected polling stations would remain open.

“Some of them have lanterns up on the desks so they can keep going,” Maudsley said.

The number of polling stations impacted by the situation is not clear but Toronto Hydro confirmed that at the height of the outage, about 1,000 customers were without power in the area bounded by Queen Street East to Lakeshore Boulevard and Broadview Avenue to Victoria Park Avenue.

The utility initially said that power would be restored at around 2:50 p.m. but the repairs were completed faster than anticipated.

Polls are open today across the Greater Toronto Area until 9:30 p.m.