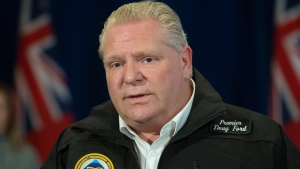 Ontario Premier Doug Ford answers questions at a COVID-19 briefing at Queen's Park in Toronto on Saturday, May 2, 2020. THE CANADIAN PRESS/Rick Madonik - POOL

Ontario Premier Doug Ford roundly criticized the Trudeau government’s plan to ban and buy back thousands of semi-automatic rifles in the country, saying the money they want to spend should be used to target gun smugglers and “gang bangers” instead.

On Friday, the feds released a plan that immediately banned the use of more than 1,500 semi-automatic, so-called “assault-style” rifles, and earmarked as much as $250 million to take roughly 105,000 of them out of private hands through a buyback program over the next several years.

“The federal government has set aside hundreds of millions of dollars to buy back guns from legally licensed gun owners, responsible legal licensed gun owners,” Ford said Saturday. “I can’t help but think the money could be put to much better use hunting down criminals and stopping illegal guns at our borders.”

Gun crime, primarily using illegally-obtained handguns, surged to record levels last year in Toronto and the GTA, prompting Toronto’s police chief and Ford to call for tougher bail conditions on those accused of gun crimes and more scrutiny at the U.S. border.

“Rather than giving these nasty criminals, these gang bangers a slap on the wrist, and they laugh at our police, let’s start giving them some tough sentences,” Ford said. “Don’t give them a slap on the wrist and then try to point the finger at legal law-abiding gun owners and spending hundreds and hundreds of millions of dollars of taxpayers’ money, for what?

Ford charged that the federal program, meant to eliminate the private ownership of the firearms most often used in mass shootings across the continent, would not impact the rate of gun crime in Toronto at all.

Ford has also come out against another federal pledge to allow individual municipalities to ban private ownership of handguns.

Ontario Premier Doug Ford answers questions at a COVID-19 briefing at Queen's Park in Toronto on Saturday, May 2, 2020. THE CANADIAN PRESS/Rick Madonik - POOL