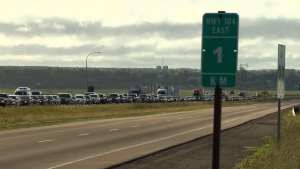 HALIFAX - Three out of four Atlantic provinces announced this morning they will lift border restrictions and open to travel from across the region beginning next week.

Nova Scotia, Prince Edward Island and Newfoundland and Labrador say the June 23 reopening is possible because of steadily declining COVID-19 rates across the region, and New Brunswick is expected to announce its position later today.

The move means travellers won't have to isolate for 14 days upon entering each province.

Nova Scotia Premier Iain Rankin says his province is also currently on track to open to the rest of the country no later than July 14.

Rankin says discussions are continuing with the other Atlantic premiers on co-ordinating an opening to the rest of Canada.

In a news release, he says lower case numbers across the region signal that “reopening to our neighbours is the right step.”

In Prince Edward Island, Premier Dennis King said residents of the other Atlantic provinces as well as the Iles-de-la-Madeleine who have received one shot of COVID-19 vaccine will be able to enter the province without having to self-isolate. The measure will begin with a “soft launch” June 23 for those entering under currently approved travel streams before broadening on June 27.

For other Canadians, visitors can enter without isolating as of July 28, provided they have received two shots of vaccine, he told reporters. The province is setting up a P.E.I. Pass system to allow travellers to establish their vaccination status ahead of arrival.

Newfoundland and Labrador Premier Andrew Furey said residents of Atlantic Canada would be welcome in his province as of 12:01 a.m. June 23, without a requirement for testing and self-isolation.

In a news release today, Furey said the reopening would benefit local business, reunite family and friends and bring people “closer to a more normal sense of life that we can all appreciate.”