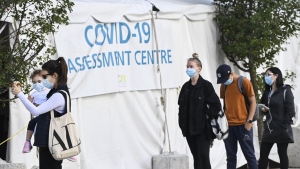 People wait in line at a COVID assessment centre at Women's College Hospital on Wednesday, September 23, 2020. Nearly 1,000 confirmed cases of a new sublineage of the Omicron variant have been discovered in Ontario, but experts say it doesn't warrant significant concern.THE CANADIAN PRESS/Nathan Denette

Nearly 1,000 confirmed cases of a new sublineage of the Omicron variant have been discovered in Ontario to date, newly released data from Public Health Ontario show, but experts say it doesn't warrant significant concern.

In a recent brief, Public Health Ontario said BA.2.20 — an evolved form of the Omicron BA.2 subvariant — has been primarily growing in Ontario.

The brief said the first case of BA.2.20 had a sample collection date of Feb. 14 and that there have been 996 cases confirmed in the province.

Over the past four weeks, the percentage of BA.2.20 cases has remained stable, at approximately 5.5 per cent, but Public Health Ontario noted that testing eligibility is currently restricted to high-risk populations and that the proportion is not representative of all BA.2 cases in the province.

Dr. Zain Chagla, an associate professor of infectious disease with McMaster University in Hamilton, said there is "no need for panic" since BA.2.20 has not caused "leaps and bounds" of COVID-19 cases overnight.

"This is probably something that's been buried within our BA.2 wave ... (meaning) whatever's happened over the last two or three months in our so-called sixth wave may have involved some of this as well," he said in a phone interview Friday.

"But recognizing that vaccines still seem very effective, that levels are receding ... and that wastewater data is down, hospitalizations are down, ICU stays are down, really suggest that community transmission of this (sublineage) does not necessarily change the game altogether. It's not going to lead to some sort of epidemiologic change in terms of increased transmission."

Public Health Ontario says BA.2.20 differs from the parent BA.2 lineage by two additional defining mutations, but the impact of the mutations on transmission, risk of severe disease, reinfection and breakthrough infection is unknown.

Dr. Gerald Evans, an infectious disease professor at Queen's University and the medical director of infection prevention and control at Kingston Health Sciences Centre, said BA.2.20 has been around in Ontario for about three months now and so far is "really not expanding."

"So my view is that this is a phenomenon that we monitor and we see not infrequently, it's been seen around the world. And typically, (these sublineages) come, they produce a few cases, don't really have a competitive advantage and eventually either die out or just kind of percolate along with the the original variant that they were with."

The public health unit with the highest proportion of BA.2.20 cases was Toronto Public Health, with 18.8 per cent of cases, followed by Middlesex-London Health Unit, with 12.7 per cent.

Dr. Theresa Tam, Canada's chief public health officer, said Friday that public health officials are tracking various COVID-19 sublineages, but are mostly keeping an eye out for a new variant that could cause a substantial increase in transmission.

"What I'm really looking out for, of course, is some substantial changes where there's an entirely new variant of concern that are not Omicron variants, but we will track these. ... Anything can happen and we will remain vigilant," she said.

Ontario reported 1,412 new infections of COVID-19 Friday, although PCR testing is limited to certain groups. The scientific director of Ontario's panel of COVID-19 advisers has said multiplying the daily case count by 10 would give a more accurate picture.

This report by The Canadian Press was first published May 20, 2022.