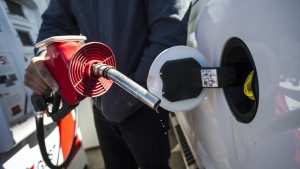 A man fills up his truck with gas in Toronto, on Monday, April 1, 2019. A cut to the provincial gas tax promised by Premier Doug Ford before the June election will finally take effect on Friday.THE CANADIAN PRESS/Christopher Katsarov

A cut to the provincial gas tax promised by Premier Doug Ford before the June election takes effect on Friday and experts say it may offer some relief to drivers facing sky-high pump prices, but the long-term benefits to consumers are unpredictable.

Regular fuel prices are hovering at close to or above $2 per litre in cities across the province.

Roger McKnight, chief petroleum analyst with En-Pro International, says the upcoming gas tax cut is an overdue "Band-Aid solution" but consumers will likely see some benefit in its early days.

As of Thursday afternoon, McKnight calculated that prices drops at Ontario pumps should be around 11 cents per litre on Friday, bringing prices to an average of 1.929 per litre.

Given that gas prices are affected by factors outside the country, he said there's a limit on what Canadian politicians can do to control prices long-term.

He noted that Ford may be facing a tough decision in December when the measure expires and prices will likely rise again just before Christmas. There could also be fluctuations over the six-month period of the tax cut, he said, pointing to potential impact from the upcoming long weekend in the United States.

"My advice to consumers when they see the price on Friday is to enjoy it, but I don't know how long it will last," McKnight said. "Politicians have no control over the price of crude or the geopolitics that's happening way outside our borders."

Ford pledged to cut gas prices during his first provincial election campaign in 2018, promising to cut pump prices by 10 cents per litre by scrapping the cap-and-trade system and cutting the provincial gas tax.

The government ended cap-and-trade after the election but the federal carbon tax then kicked in, which negated any savings. Ford also had promised to cut gas taxes last fall but did not ultimately do so, later saying the time wasn't right.

He's also since called on the federal government to bring in further cuts.

Teresa Di Felice, assistant vice-president at the Canadian Automobile Association's south central Ontario branch, said it's hard to predict where gas prices will go, but the cut should stop costs from climbing so significantly.

"Hopefully, this will just create a little bit of breathing room," she said.

Di Felice noted that it's coming in combination with other measures, such as a rebate for people taking trips within the province, that seem to offer people some financial wiggle room to travel and spend money around the province this summer as many pandemic restrictions have lifted.

"I think they're looking at a combination of efforts to continue to keep the economy going after a couple of really difficult years," she said.

A man fills up his truck with gas in Toronto, on Monday, April 1, 2019. A cut to the provincial gas tax promised by Premier Doug Ford before the June election will finally take effect on Friday.THE CANADIAN PRESS/Christopher Katsarov