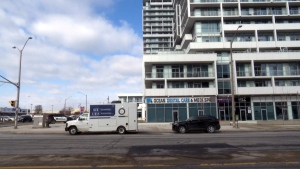 A vehicle belonging to the province's police watchdog is seen at an Oakville apartment building on Sunday. (CP24)

The province’s police watchdog is investigating after a 40-year-old man sustained serious injuries from a fall off the balcony of an Oakville apartment on Sunday.

Officers with the Halton Regional Police Service responded to an address in the area of Speers Road and Kerr Street at around 4 a.m. for a report of a dispute between a man and a taxi driver.

The Special Investigations Unit (SIU) said the Halton officers “were allowed entry into a second floor apartment unit” when they arrived on scene. 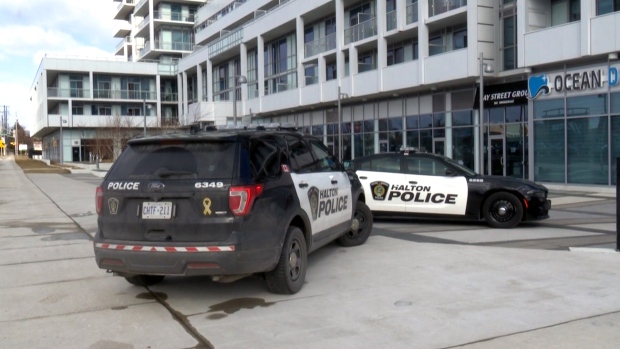 Once they entered the unit, the SIU said, a 40-year-old man fled to the balcony. He then fell from the balcony to the ground below.

The man was then taken from the scene to Hamilton General Hospital to be treated for his serious injuries.

“At this time the SIU has invoked its mandate and will be conducting an investigation,” Halton police said in a news release issued on Sunday. “Due to the involvement of the SIU, the Halton Regional Police Service cannot provide any further details pertaining to the incident.”

Four investigators and one forensic investigator have been assigned to this case, the SIU said.

The SIU is an arm’s length agency that is called in to investigate any incident involving police and a member of the public that results in death, serious injuries or an allegation of sexual assault.