Province will not expand size of gatherings in Ontario before Stage 3: health minister 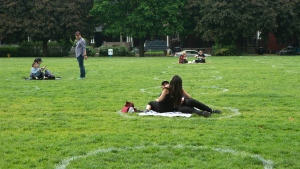 People sit within circles painted by the city in Toronto's Trinity Bellwoods Park, as a measure to enforce physical distancing, on Saturday, May 30, 2020. THE CANADIAN PRESS/Chris Young

Ontario will not be expanding the size of allowable gatherings before regions enter Stage 3 of the province’s reopening plan, Ontario’s health minister confirmed Tuesday.

Speaking at Queen’s Park on Tuesday afternoon, Health Minister Christine Elliott said any increase in allowable gatherings will be announced in conjunction with Stage 3.

“The public health doctors who have been advising us are asking that we proceed in stages and not to do things incrementally because they really want to see the effects of everything that we’ve done at a particular stage on its effect on public health,” she said.

“So it is going to be something that will happen together with Stage 3.”

Under Stage 2 of the province's reopening plan, gatherings of no more than 10 people are permitted.

As of today, all regions in Ontario have been permitted to enter Stage 2, including Kingsville and Leamington, two municipalities that were held back due to outbreaks involving migrant farm workers.

As part of Stage 2, restaurant patios, hair salons, barbershops, and shopping malls were all given the green light to reopen.

The province has not said when regions will be allowed to enter the final stage of restarting the economy, which could involve the reopening of businesses such as fitness studios and movie theatres, which have been closed to customers since March.

Health officials have said there would need to be a consistent decline in the number of new cases and hospitalizations in order to proceed to the next stage.

New cases in the province are continuing to trend downward, with 112 new cases confirmed today, the second lowest number of new cases in months.

“Since it’s going to be last stage we want to make sure our t’s are crossed and i’s are dotted,” Premier Ford said last week.

Elliott said officials are still trying to determine the size of gatherings that will be permitted at Stage 3.

“I can’t advise you the exact number right now but that is what is currently being discussed at the health table.”