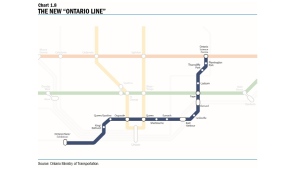 A map of the proposed Ontario Line in Toronto is pictured in this handout image from the 2019 Ontario budget.

After a year of negotiating, the Ford government has agreed not to upload Toronto’s existing subway system and will cover the city’s share of funding for the planned Ontario Line and Scarborough subway extension, Toronto Mayor Tory said Wednesday.

Tory said that in exchange for supporting the provincial Ontario Line proposal, which replaces city plans for the Downtown Relief Line, the Ford government will cover the city’s share of capital costs to build both the Ontario Line and a three-stop Scarborough subway.

The provincial government will no longer seek to upload responsibility for the Toronto subway system but will instead have ownership of the two new planned projects, but the TTC will operate them.

“We have a way forward that will see close to $30 billion in new transit built across the city and see the existing subway system remain in the hands of Toronto taxpayers who built it up,” Tory told reporters on Wednesday.

He said the province has also agreed to cover all of the city’s sunk planning and staff costs on the downtown relief line and the Scarborough subway, leaving the city the money to begin planning other projects such as the Eglinton East LRT and Waterfront LRT, along with the ability to commit more money to state of good repair projects in the existing system.

“We have defended our TTC and found a way to move forward with transit expansion in our system.”

Throughout the past year, Premier Ford and his ministers had insisted they wanted to upload responsibility for Toronto’s existing subway system, and even counted on as much as $5 billion in city money to pay for a portion of the cost to build their proposed Ontario Line.

“I want to thank Premier Ford for recognizing the need to sit down together and come to an agreement so that we can get on with building transit together,” Tory said.

Transportation Minister Caroline Mulroney said Wednesday that with the agreement, the city and province “are on the cusp of pursuing one single unified plan.”

She and associate minister Kinga Surma said the plan calls for:

The Ontario Line to be completed by the end of 2027

The Scarborough Subway Extension to be ready by 2029/2030

The Yonge North Subway Extension into Richmond Hill by 2029/2030

Tory said that city staff has studied the Ontario Line proposal, which links Flemingdon Park to the Bloor Danforth Line, then snakes over to Queen Street Station and west to a terminus at Exhibition Place, and found that although there are questions about design, tunneling and the type of rolling stock it will use, it is “viable.”

The federal Liberals are reportedly set to announce that they would support both the Ontario Line and the Scarborough Subway Extension with capital support, but Tory said he understands that the NDP and Conservatives are also in favour of both projects.

Mulroney couched the pledge by the Liberals in the fact that she says the federal Conservatives and NDP had already expressed interest before Wednesday.

“Our government is very happy to learn that the federal Liberals have joined the Conservatives as well as the NDP in supporting our plan,” she said.

She described the now abandoned pledge to upload responsibility for the TTC subway network as “a means to an end” and said the public should be happy that the province and the city are largely in agreement.

“Building subways is what our government campaigned on,” she said.

Incumbent Liberal MP Bill Morneau suggested the Trudeau government is on board with the new deal, saying they’ve been “good partners” with Toronto in the past.

“We’re really pleased with the city having control over the TTC, this was important from our perspective and we’re going to support the city priorities,” he said.

He indicated that much of the federal money needed to build the four projects mentioned Wednesday “is already there.”

TTC Chair Jaye Robinson said she is happy that negotiations with the province are over and the city can now put more money towards keeping the TTC in a state of good repair.

"The other levels of government will invest nearly $30 billion in new transit for Toronto. This will allow the TTC and City to focus on operations and tackling the upkeep of our current system, which will benefit from City funding previously allocated to transit expansion."

City staff estimates the city can divert up to $5 billion to state of good repair projects as a result of the deal with the province, but up to $24 billion more over the next decades to maintain the existing transit system.

As a Mayor who was elected to get on with building transit & who was elected on a promise to work with the other governments, I believe this is our way forward & the only way we will ensure, for this generation of Toronto residents and future generations, that transit gets built.