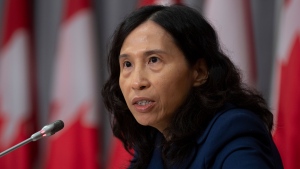 OTTAWA - Canada will see a dramatic resurgence of COVID-19 cases unless people limit contact with others in coming days, the country's chief public health officer warns.

Dr. Theresa Tam said Tuesday the public has a vital role to play in helping health agencies limit the spread of the virus.

“The challenge we face now is to stay the course no matter how weary we may feel,” Tam told a news briefing.

She made a special appeal to young Canadians, saying COVID-19 levels won't return to a slow burn without their help, given the incidence has been highest among people age 20 to 39 since late June.

“We can own this pandemic, and not let it own us.”

The Public Health Agency of Canada released its latest modelling Tuesday, predicting up to 155,795 cases and up to 9,300 deaths by early October if the current trajectory of the epidemic continues.

The message throughout the presentation was clear: everyone needs to act now to limit their contacts or things will get worse.

“Canada is at a crossroads and individual action to reduce contact rates will decide our path,” said the newly released presentation deck.

Federal Health Minister Patty Hajdu echoed that advice in urging people to think carefully before accepting invitations to social gatherings - making the point that saying “no” will help drive numbers down.

“All of us have the future in our hands, in terms of the decisions we are making today” she said. “It's a sacrifice that we all have to make.”

She also said, however, that the spread of the novel coronavirus is not the same across the country, or even across individual provinces, so determining whether restrictions need tightening demands a “surgical approach.”

Meanwhile, the government announced a deal with Sanofi and GlaxoSmithKline for doses of a prospective COVID-19 vaccine, the latest of several such arrangements.

Procurement Minister Anita Anand said Canada has a deal to buy up to 72 million doses of the experimental vaccine candidate, which is just starting the second of three trial phases this month.

In all, Canada has committed $1 billion to buy at least 154 million doses of vaccines from five different companies, and much of that money will not be refunded even if the vaccines never get approved.

“We need to make a substantial investment in order to ensure that Canada is well positioned to secure access to the successful vaccine or vaccines,” Anand said in an interview.

“The way in which we are doing that is to bet on multiple horses at the same time in order to ensure that as one or more of those horses crosses the finish line, we have access to those vaccines.”

Canada has signed deals with Moderna, Pfizer, Novavax, Johnson & Johnson and now Sanofi and GlaxoSmithKline, all of which are working on some of the most promising vaccines, but none of which has completed all the required clinical trials, or been approved for use in Canada.

On Sept. 3, Sanofi and GlaxoSmithKline said their vaccine candidate was going to begin Phase 1/2 trials which will involve tests on 440 individuals. The hope is the vaccine will be ready for the third and final phase of trials by the end of the year, and approved for use in the first half of next year.

Moderna has a vaccine in Phase 3 trials, and Pfizer's is in a combined Phase 2 and 3 trial. Novavax is in a Phase 2 trial, while Johnson & Johnson is in a Phase 1/2 trial.

Most clinical trials have three phases to ensure the safety and effectiveness of the vaccine or drug being developed.

Each level adds more volunteers on whom the drug is tested, looking for adverse health effects and whether the vaccine does cause a person to develop antibodies that can protect against COVID-19.

Anand said Canada has signed an agreement with Gilead Sciences and McKesson Canada to get 150,000 vials of remdesivir, the only antiviral drug that has proven effective at treating patients with COVID-19. Health Canada approved the drug for use on COVID-19 patients at the end of July.

The doses will begin arriving at Canadian hospitals this month.

Canada has also joined the international vaccine co-operative known as the COVAX Facility, which is bringing together wealthy countries with low- and middle-income nations to collectively invest in doses of vaccines.

The government has not yet announced how much money it will contribute, a figure that was to have come last week but has been delayed. Anand says Canada remains committed to COVAX and more details will come soon.

The Canadian Coalition for Global Health Research and the Canadian Society for International Health have both criticized Canada for acting to buy doses of vaccine for itself, saying it hinders efforts to ensure successful vaccines are distributed fairly around the world.

GAVI, the Vaccine Alliance, said Monday that 64 wealthy countries, including Canada, had joined the COVAX Facility. The United States has not joined.