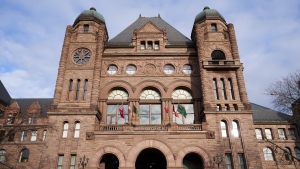 The Ontario legislature is pictured at Queen's Park in downtown Toronto in this undated photo. (CTV News/Craig Wadman)

Anyone seeking to enter Queen’s Park, including elected representatives, will have to be fully vaccinated or test negative for COVID-19 as of next month.

He said as of Oct. 4 “everyone seeking to enter the Legislative Precinct” will have to produce proof of vaccination or a recent negative antigen test result.

The announcement of the new policy comes after NDP House Leader Peggy Sattler sent an open letter last week expressing a desire for a mandatory vaccination policy for all those accessing Queen’s Park. Sattler, however, said in her letter that “a vaccine-or-test policy” would not be acceptable in her view.

"This does not go far enough. We should be leading by example, and requiring all MPPs and staff to be vaccinated," Sattler said in a message posted to Twitter on Thursday afternoon. "A vaccine-or-test policy falls far short. Why would the government expect less of an MPP than they expect of someone going to a movie or out for dinner?"

The vast majority of elected representatives at Queen’s Park are believed to be fully vaccinated, however Chatham-Kent—Leamington MPP Rick Nicholls was ousted from the Progressive Conservative caucus earlier this summer after he refused to get vaccinated.

Another unvaccinated PC MPP – Scarborough Centre’s Christina Mitas - was also threatened with expulsion but was ultimately allowed to remain in caucus after producing a medical exemption.

In his memo, Arnott said that he is grateful for the “diligence” legislature members have shown in following public health protocols to date and believes the new requirement will help “further protect us all.”

But in a text message to CTV News Toronto on Thursday Randy Hillier, a former PC MPP for Lanark—Frontenac—Kingston who was removed from caucus in 2019, called the policy a “unlawful directive” without elaborating.

Hillier’s vaccination status isn’t known but he has openly louted mandatory masking rules in the past and attended protests against public health measures introduced to limit the spread of COVID-19.

The Ontario legislature is pictured at Queen's Park in downtown Toronto in this undated photo. (CTV News/Craig Wadman)