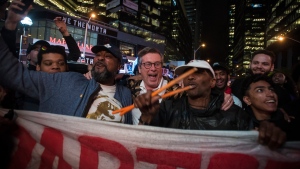 Large sections of Raptors fans at the Scotiabank Arena initially cheered when Kevin Durant went down clutching his Achilles tendon, prompting several Toronto players to wave their hands to get the crowd to stop.

Many in the stands soon started clapping instead and muted "K-D" chants could be heard as Durant was helped off the court in the second quarter.

Tory said Tuesday that he was in the arena at the time and that Durant "very quickly" got a warm round of applause as he was led to the dressing room.

The mayor said that while any crowd may contain some who react the wrong way, the "vast majority" of people at Monday's NBA Finals game acted like good sports fans.

He said it's important not to overblow such incidents or make generalizations about what Toronto sports fans are like.