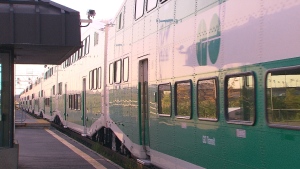 A Go Transit train can be seen in this file image.

GO Transit service has been further reduced amid a ridership decline of roughly 90 per cent during the COVID-19 pandemic.

The changes, which take effect today, will see service continued on all of GO Transit’s train and bus routes but the frequency reduced.

In some cases trains on busy routes like the Lakeshore East line will now only run once an hour.

The Lakeshore West line will also mostly be reduced to once an hour service but run every half hour during the peak of rush hour.

The UP Express, meanwhile, will continue to run on a reduced scheduled of once every 30 minutes.

“Transit is considered a critical service to ensure essential workers in hospitals, shelters, long-term care facilities, and the food service industry can get to their jobs. Metrolinx staff on the frontlines, in operations and on the incident command team, are closely monitoring ridership and where and when service is needed the most,” a news release from GO Transit states. “We are ready to shift services quickly to ensure customers can maintain adequate distancing and get to their jobs.”

The TTC has also reported significantly declines in ridership – estimated to be about 70 per cent – but has not moved to reduce its service levels at this time.