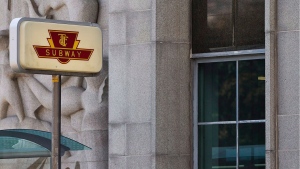 A subway sign is seen in Toronto on Friday, August 24, 2012. THE CANADIAN PRESS/Michelle Siu

Regular subway service has resumed on the TTC’s Line 2 Sunday morning following an injury on the tracks at Spadina Station.

Subway service between Ossington and St. George stations was shut down at around 8:30 a.m.

At the time, the transit agency said the service suspension was due to a power outage, but then later confirmed they were responding to an injury on the subway tracks.

Line 2 Bloor-Danforth: No service between Ossington and St George while we respond to an injury on the tracks. Shuttle buses are running.

Shuttle buses were operating in the affected area.