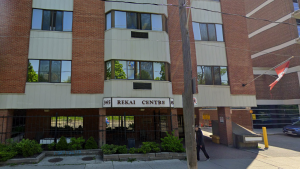 The Rekai Centres' Sherbourne Place facility is pictured above in this photo from Google Maps. (PHOTO: Google Maps)

A resident of a downtown long-term care home has died and three others have tested positive for COVID-19 following an outbreak of the virus at the facility, officials have confirmed.

In a statement released Tuesday, The Rekai Centres said a resident at its Sherbourne Place facility, located near Sherbourne and Carlton streets in the city’s downtown core, died on Monday night “as a result of contracting COVID-19.”

According to the centre, the resident first showed symptoms of the virus on March 19 and was “immediately isolated and monitored” until his death. They were tested for COVID-19 and the result came back positive on March 27.

The age of the victim has not been released.

The facility also confirmed that three other residents have tested positive for COVID-19 and tests results are pending for two other occupants of the home.

The outbreak, the facility said, occurred on the fourth floor of the building.

“As this is a rapidly changing situation, the Rekai Centre is reaching out to all of resident families to apprise them of the situation, answer any of their questions and to re-assure them that the Centre is doing everything possible to guard the safety of their loved ones currently residing with both Rekai Centres,” the statement concluded.

Dozens of long-term care homes around the province have reported cases of COVID-19, including a facility in Bobcaygeon where 12 patients have died of the virus so far.

'I just wish we had a crystal ball'

The province reported 260 new cases of the virus on Tuesday, bringing Ontario’s total to 1,966 including deaths and recoveries.

At Premier Doug Ford’s daily news conference at Queen’s Park on Tuesday, he was asked why the province didn’t act quicker to protect people in long-term care homes.

"I believe we acted immediately from the advice that we got from the chief medical officer of health," Ford said.

He said visitors are not being allowed into long-term care facilities, enhanced screening measures are in place, and the province has boosted funding for frontline workers and additional cleaning.

“We are doing everything we can to make sure we protect the most vulnerable seniors,” he said. “I just wish we had a crystal ball a month ago, a month and a half ago, to see where this was going but it is all hands on deck. I won’t spare a penny.”