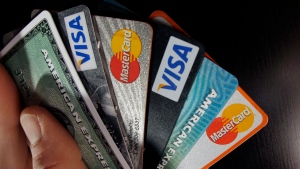 Credit cards are seen in this undated file photo. (File)

Customers riding GO Transit and a number of other GTA transit systems can now pay for a ride the same way they do for a coffee or a meal — by simply tapping a credit card.

Starting today, riders on GO Transit, Brampton Transit, MiWay and Oakville Transit can pay an adult fare by tapping a credit card on a Presto device. They can also use a phone or watch that has their credit card information loaded.

Metrolinx ran a test pilot on the UP Express this past year and said it was successful, with more than 28,500 credit card payments since March 2021. The pilot also added contactless debit payment in October 2021. Both options will continue to be available on UP Express.

Those who tap with a credit card will still need to tap off with the same card or phone at their destination when using GO Transit and UP Express.

The system will accept Visa, Mastercard or American Express, as well as Visa Debit and Debit Mastercard.

Metrolinx cautioned that using a credit card to tap might mean that a rider is not eligible for a discount they would normally get when transferring between transit systems. As well, many transit systems that they might wish to transfer to do not yet accept contactless credit card payments.

The change introduces a feature that many transit users have long argued should be a part of the system. Back when the province rolled out the Presto card system more than a decade ago, it found itself at odds with Toronto transit officials who argued that people should be able to easily pay with a credit card instead of loading a virtual Presto wallet.

While contactless credit card payment is not yet available on the TTC, the province’s largest transit system, Metrolinx says the feature will be rolled out to more transit agencies soon, along with an option for debit payment.