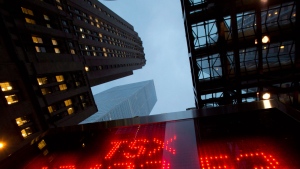 Canada's main stock index had its worst day in more than a year Friday as worries about a new COVID variant in southern Africa prompted a broad-based selloff by spooked investors.

Hardest hit were those sectors and companies that have most benefited from recent global progress in getting the COVID-19 pandemic under control, such as airlines and other travel-related stocks. Air Canada took one of the biggest dives, with its share price falling almost nine per cent on fears a new variant will impact travel demand or bring about more government-imposed travel restrictions.

Energy stocks also took a beating as the price of oil fell more than 13 per cent. Oil company MEG Energy Corp.'s stock was down almost 11 per cent while Crescent Point Energy Corp. was down 8.6 per cent.

“Oil prices are getting absolutely smoked here,” said Mike Archibald, vice-president and portfolio manager with AGF Investments Inc. “This would be the worst day since the plunge that we saw in April of last year when the price (of oil) went negative.”

Archibald said with many traders away from their desks for the U.S. holiday weekend, the stock market moves Friday were exacerbated by low liquidity.

“We're going to need to be patient and see how this continues to evolve over the coming days. But clearly the market is nervous as to whether or not this is going to result in another Delta-variant like condition,” he said.

The market “usually never bottoms on a Friday,” Archibald added, so investors should expect more volatility - and likely more negative headlines - in the week ahead.

The U.S. dollar rallied against all other currencies Friday, and the price of gold climbed - two more indications of a “clear rush to safety” by rattled investors, Archibald said.

But he pointed out that in spite of Friday's plunge, the market is still up overall and it's too early to say whether that positive long-term trend will be impacted by the news out of Africa.

“It's too early to know exactly what the implications are here,” Archibald said. “Obviously there is a level of nervousness here until we see some more data out of these regions that are showing these cases.”

Cases of the new variant, which is being called Omicron, were found in Hong Kong, Belgium and Tel Aviv as well as major South African cities like Johannesburg.

The economic impacts of this variant were already being felt. Canada, as well as the European Union and the U.K. both announced travel restrictions from southern Africa on Friday. After the market closed, the U.S. also put travel restrictions on those coming from South Africa as well as seven other African nations.

The Canadian dollar traded for 78.30 cents US compared with 79.03 cents US on Thursday.

This report by The Canadian Press was first published Nov. 26, 2021.