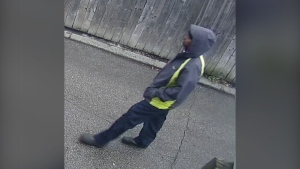 Police are looking for this man who allegedly followed several women and girls in the Leslieville area. (Toronto Police Service)

A man wanted for allegedly following a girl to her east-end home on Monday is believed to be involved in three other incidents where women were also tailed.

On Tuesday, police released photos of a man who they said followed a 13-year-old girl while she was walking in the area of Queen Street East and Pape Avenue.

After the girl got into her house, the man allegedly approached the home, rang the doorbell and banged on the door.

On Friday, police issued a news release saying that the same man is suspected of following several women and girls in three separate incidents in the Leslieville neighbourhood.

The first one occurred on Nov. 25 shortly before 9 a.m. in the area of Queen Street East and Caroline Avenue. Police said a woman was walking her dog when she observed a man following her closely “while staring at her.”

The man fled the area when the woman spoke to a construction worker nearby, police said.

On the same day, just after 5:30 p.m., another woman was walking her dog near Queen Street East and Pape Avenue. Police said a man followed the woman into her condo vestibule.

“The woman was able to fob into her building quickly and close the door behind her, stopping the man from entering,” police said.

The woman called a friend and the man shortly fled the condo.

The third incident happened on Nov. 27, shortly before noon. Police said a 43-year-old woman was walking home in the Queen Street East and Jones Avenue area with three young girls when a man started following them.

The man was allegedly staring at the girls as he was walking. Police said the woman and the girls went into a nearby schoolyard to get away from him.

When the woman took out her phone to call a friend, the man fled the area, police said.

Updated photos of the suspect were released by police on Friday, seeking the public’s help in identifying the man.

Police are looking for this man who allegedly followed several women and girls in the Leslieville area. (Toronto Police Service)