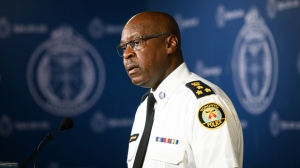 Toronto Police Chief Mark Saunders says he’s using the $4.5 million governments have given him to launch a three month plan dubbed "Project Community Space" to boost the presence of police in crime-prone areas, build better connections with community groups, and proactively check up on those out on bail.

Saunders says he “doesn’t want to turn neighbourhoods and communities upside down,” but building on his comments last week about accused in gun crimes out on bail, he says officers will be engaging in “proactive monitoring of bail compliance,” as part of the program, which will end on Oct. 31.

The money will be used to pay officers overtime for “call backs” to participate in additional deployments across the city, directed by the gun and gang task force.

Saunders said sometimes that will mean extra uniformed officers on patrol, other times it will involve plain clothes units. It will be based on intelligence gathered and is not meant to harken back to the days of mass carding in marginalized neighbourhoods, he said.

“Because it’s intelligence-led, we will understand the patterns and trends, where we need to be, and what kind of resource will need to be there.”

But he reiterated his belief that bail is granted too easily in gun crime cases in Toronto, and the freedom enjoyed by some of those accused is fueling a cycle of gun crime.

“I’m not sure what a viable excuse would be for giving bail to someone who shoots somebody,” he said.

He added that in cases where accused individuals are released on conditions, they can remain in the community after being accused of breaching those conditions.

“We have cases where people are charged and they are given bail and they breach the house arrest, and then they are arrested and are given house arrest conditions again,” he said. “Right now I think the deterrent factor is not as strong as it could be.”

His comments last week drew criticism from the head of the Criminal Lawyers Association, who said it was “utter nonsense” that people charged with gun crimes out on bail were to blame for the increase in gun violence.

In response, Saunders invited lawyers to come with him to communities impacted by gun crime.

“If anyone disagrees with me I can take them through the communities where they see in real time where people are arrested and the community does contribute, and then a short time later that very person charged with firearm offences is back out again. It’s very frustrating.”

The new funding and resulting plan comes as 16 people were shot and injured during the August holiday weekend in Toronto.

Police earlier in the year felt confident they had suppressed gun crime, with shooting occurrences down in the city this year right up until the end of March.

Toronto Mayor John Tory said he fully supports Saunders' plan, especially when it is combined with more investment in activities for youth and other programming in low-income neighbourhoods.

"He works as part of a team," Tory said of Saunders. "Certainly when I asked for a plan, he responded with a plan and the other governments to their credit responded with financial support."

He echoed Saunders' belief that too many accused in gun investigations secure bail.