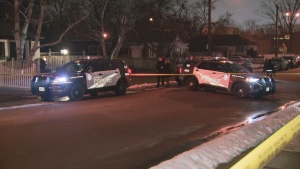 Police are investigating a stabbing near Midland and Sheppard on Jan. 14, 2021.

Two men have been transported to a trauma centre with serious but non-life-threatening injuries after a stabbing took place in Scarborough on Thursday night.

Toronto police were initially called to the area of Lockie and Midland avenues, north of Sheppard Avenue East, just after 9 p.m. for reports of a break and enter in progress.

The two adult males were taken from the scene to hospital for treatment, Toronto paramedics said. Their exact ages have not been released by officials.

Police confirmed one person has been taken into custody in connection with the incident. Officers recovered two weapons, a knife and a long stick or bat, on the scene.

No further information has been released by police at this time.