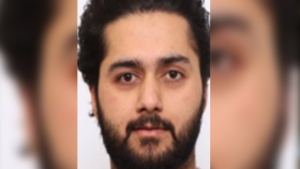 Harshdeep Binner, 23, of Brampton, was arrested on Sept. 27, 2022 in connection to the assault of Elnaz Hajtamiri.

York Regional Police have arrested a second suspect in connection with the violent assault of missing woman Elnaz Hajtamiri, weeks prior to her abduction last winter.

The assault allegedly took place in an underground parking garage on King William Crescent, near Yonge Street and Bantry Avenue in Richmond Hill on December 20, 2021.

Two suspects are alleged to have attacked Hajtamiri with a frying pan while attempting to abduct her, before a concerned citizen stepped in. The two suspects then fled in a stolen vehicle, according to police.

Hajtamiri was taken to the hospital with non life-threatening injuries and later released.

One of the suspects, previously identified as 23-year-old Brampton resident Riyasat Singh, was arrested in April and charged with four offences in connection with the incident, including attempted murder and attempted kidnapping.

In a news release on Tuesday, police confirmed that a second suspect wanted on a Canada-wide warrant in connection with the assault was taken into custody last week.

Harshdeep Binner, 24, is charged with four offences, including attempted murder and attempted kidnapping.

The latest arrest comes as police continue to search for Hajtamiri, who was subsequently abducted from a Wasaga Beach home on Jan. 12 of this year.

Police have previously said that three males dressed in police gear allegedly forced their way into the home on Trailwood Place, where Hajtamiri was staying with relatives.

They then fled the scene with Hajtamiri in a 2016-2022 model Lexus RX sport utility vehicle, according to police.

Hajtamiri has not been seen since, although in July, police charged Hjtamiri’s ex-boyfriend and former business partner Mohamad Lilo, 35, of Brossard, Québec, with kidnapping in connection with the Jan. 12 disappearance.

Lilo is also facing attempted murder and attempted kidnapping charges stemming from the December 2021 assault, according to police.

In the news release issued on Tuesday, York Regional Police said that its officers are “continuing to work closely with the Ontario Provincial Police in its ongoing investigation into the kidnapping” but provided no further updates.

Both Binner and Singh remain in police custody in connection with the Dec. 21, 2021 assault and are awaiting future court dates.