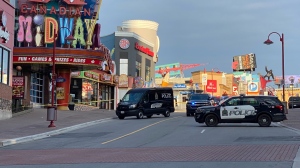 A second teen from Mississauga has been arrested in connection with a deadly triple shooting at a popular Niagara Falls tourist attraction back in April.

Niagara Regional Police responded to a shooting on Clifton Hill near the Great Canadian Midway at around 12:30 a.m. on April 8.

Police arrived at the tourist attraction and found three males under 18 years old with gunshot wounds.

One of the victims was pronounced dead at the scene and the other two were taken to hospital with serious injuries, police said. Those victims survived.

The suspect cannot be named under the terms of the Youth Criminal Justice Act.

On Aug. 10, police confirmed that a second suspect from Mississauga has been arrested in connection with the shooting.

As the suspect was under 18 at the time of the offence his name will not be released as per the provisions of the Youth Criminal Justice Act.

The male was scheduled to appear in court for a bail hearing on Aug. 10 in St. Catharines.

The investigation remains ongoing and Niagara police are asking anyone with information to contact Det. Sergeant Andrew Knevel at (905) 688-4111, dial option 3, and extension 1009104. The public can also call Crime Stoppers anonymously at 1-800-222-8477.